On a quiet afternoon outside Texas’ oldest dance hall in 2013, Paul English sat in the back of his tour bus, counting money. Though he would be playing drums that night with his boss, Willie Nelson, the 81-year-old English also had other responsibilities: collecting payments from promoters, and handling sound, lighting, hotel bills, and payroll for Nelson and his 19-person traveling crew. This had been English’s job since the Sixties, back when they played dive bars. English, an intimidating character with a criminal past, made sometimes dodgy promoters pay up — occasionally using a pistol.

That day, at New Braunfels’ Gruene Hall, English showed me a sheet documenting the finances of their tour, a two-week stretch of Texas clubs. “Sometimes we do real good, sometimes we don’t do well at all,” he said. The smaller venues on this tour meant “we have several of ‘em that won’t be very good,” he said. English’s shelves were full of binders documenting the itineraries of past tours; he pulled out one from an Australian run in the late Seventies and flipped open to a page detailing the country’s drug laws. English’s iPad pinged; his online chess partner, “BioWillie,” a.k.a. his employer of a half-century, had made a move from a nearby bus.

English, who died Wednesday at 87 after battling pneumonia, was Nelson’s drummer, bookkeeper, and protector — and best friend. Nelson normally doesn’t like to pick favorites, but he didn’t hesitate to call English that when I was reporting the first of two features about the country music legend. Nelson wrote 1971’s “Me and Paul,” about their times together — the run-ins with the law, wild nights, and skepticism they faced going through the world as country outlaws. Up until this year, English could always be seen playing the snare drum directly behind Nelson during “Me and Paul,” grinning especially at the line: “At the airport in Milwaukee, they refused to let us board the plane at all/They said we looked suspicious/But I believe they like to pick on me and Paul.”

“It’s all true,” English said of that song. That line about being “busted in Laredo for reasons that I’d rather not disclose/But if you’re staying in a motel there and leave/Just don’t leave nothing in your clothes”? English said that happened in 1969, when Nelson headlined a benefit concert. Someone working on the show saw Nelson and English smoking in their hotel room, and their room was later searched. “The road is never dangerous to me,” English said of their travels. “Willie was just such a nice guy, you know? And he’s really that way. That’s what I like about him.”

“Had it not been for Willie, I would be dead or in the penitentiary,” English once said. They first met in 1956, in Fort Worth, Texas. Nelson had a noontime show on the local station KCNC called Western Express, where he sang and spun records, introducing himself as a “snuff-dippin’, coffee-pot-dodgin’ hillbilly from Hill Country.” Paul’s brother Oliver was a guitarist and a musical mentor to Nelson, well versed in the styles of Django Reinhardt and Andrés Segovia. In his book It’s a Long Story: My Life, Nelson said he liked Paul from the moment they met: “[He’d] been busted for some petty crimes and gone to jail in Waxahachie,” Nelson said. “He was a gun-toting, fun-loving outlaw with plenty of charm with no fears.… He talked about how he’d been on the Fort Worth Press‘ ’10 Most Unwanted List’ five years in a row.”

English was a leatherworker, not a drummer, but that didn’t stop Willie from asking him to drum on a cardboard box behind him on live radio. Nelson liked his tempo, and English started sitting in with Nelson at a local dive. “We just played one place: 4010 Hemphill,” English said, remembering the address 60-something years later. They played three nights a week for six weeks, $8 a night per musician. After Nelson moved to California and elsewhere, they kept in touch. “When he would play Houston, he’d stay out with me,” English said. “We’d stay up all night, you know, playing music, stuff like that.”

English wasn’t always proud of what he’d done before joining up with Nelson. “I was pretty bad, pretty bad,” he said, describing his behavior as a young man. According to Joe Nick Patoski’s Willie Nelson: An Epic Life, English was working as a pimp in the Sixties when Nelson asked him to join his band permanently. He agreed, even though it meant going from making thousands of dollars a week to $30 a night.

Soon, Nelson’s career picked up. He moved from Nashville to Austin and formed the Family Band, a wildly eclectic crew that included his sister Bobbie on piano, the young harmonica player Mickey Raphael, and the long-haired hippie bass player Bee Spears, and they started drawing huge crowds at the hippie club the Armadillo World Headquarters. The starkest figure onstage was English, who wore all black, including a hat and a cape. Nelson encouraged English to wear the cape after they spotted it while window-shopping in Hollywood. English worried it would make him look like the devil. “With that face hair, you already look like the devil,” Nelson recalled saying in his book. “Why else are those gals chasing after you?’ I went in and bought if for Paul. He wore it onstage for the next 50 years.” 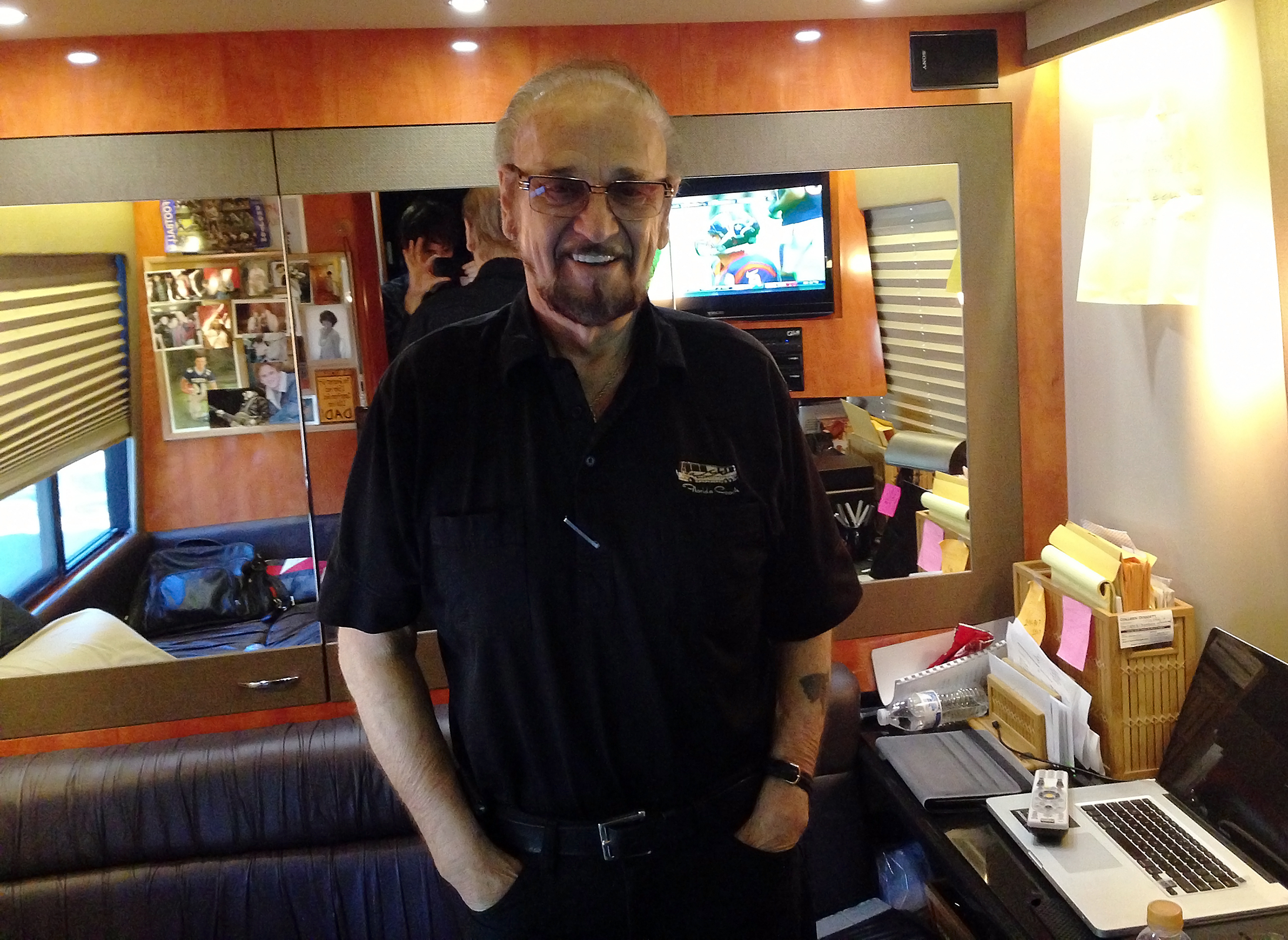 On his bus, English told me that he and Nelson had gone through a lot of pain together. His hardest moment came in the early Seventies, when he lost his first wife, Carlene. “My first wife killed herself,” English said. “Willie helped me through that.”

The loss set English on a destructive path — he went from 180 pounds down to 135. Around that time, Nelson persuaded him to go to Mexico, where they hung out with Kris Kristofferson and Bob Dylan, who were filming Sam Peckinpah’s Pat Garrett and Billy the Kid. “The guys told me: ‘Every once in a while, you’re going to have a good day … and that helped me,” English said. Nelson wrote the gorgeous ballad “I Still Can’t Believe That You’re Gone” about English’s loss. He waited a year to play it for English. “It brought me to tears,” English later wrote. The song wound up on 1974’s Phases and Stages, one of Nelson’s best albums.

English would later watch how Nelson dealt with tragedy, including the time when he lost nearly everything to the IRS in the early Nineties. “He was always positive-thinking,” English said. “When he had trouble with the IRS, he didn’t worry about it.”

In conversation, English played down the legendary stories about his checkered past. He laughed at their “outlaw” label: “I don’t know about that,” he said. Asked about his forceful tactics collecting money from club owners, English allowed, “There were times like that. Not very many, but there were times.”

English suffered a stroke in 2010. But he was back on the road almost immediately, even if he spent less time onstage and handed most of the percussion duties over to his brother, Billy English. Nelson said that Paul didn’t mind being out of the spotlight. “Oh, he loves it,” Nelson said of his longtime friend. “In fact, one time we did the Spirit album tour where it was just stripped-down acoustic set with no drums, but Paul went along anyway and kept the books, collected the money.” 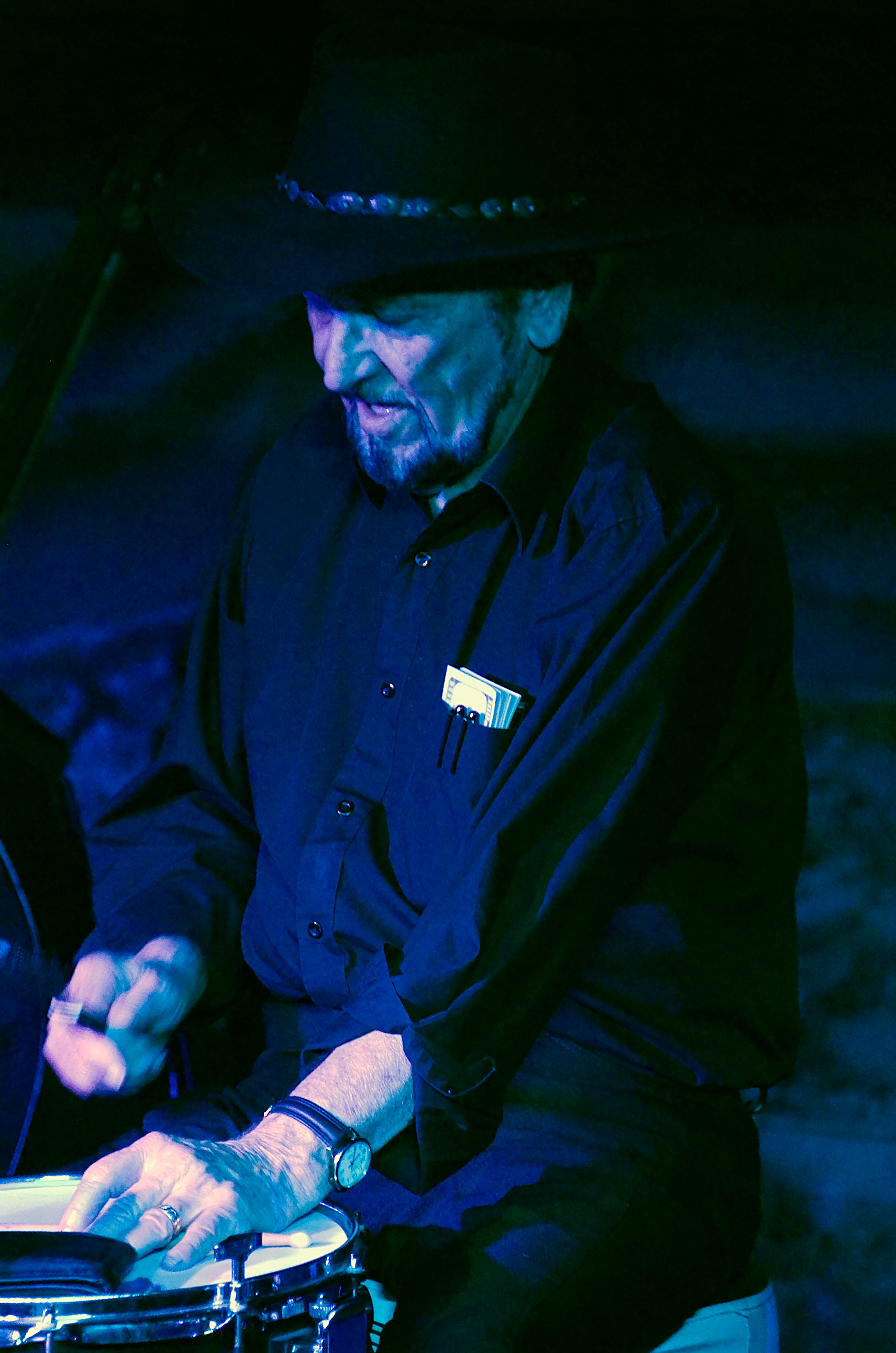 English onstage at Gruene Hall in 2013. Note the stack of hundred-dollar bills in his shirt pocket. (Photograph by John Doyle)

English said he wasn’t sure why he liked the road so much. “I just like it. It’s a way of life, I guess. I like hearing Willie sing. We don’t ever know [what he’ll play] until we get up there. He don’t have a set [list]. He starts off with about four or five songs, and that’s about it, it’s up to him where he goes.” The hardest part of touring, English said, was keeping his house in order when he was gone most of the year; getting a basic home repair done could take 15 years. “Just coming and going,” he says with a snap, “a whole year goes by like that.”

This week, Willie’s son Micah Nelson, who played percussion alongside English for years, paid tribute to his late family friend’s artistry: “Paul English was one of the most underrated drummers in country-jazz music,” he wrote on Instagram. “He had a style unlike anyone. He would play just a snare drum with a brush and a stick, straight four-on-the-floor and shuffle on the snare drum at the same time … it should not have worked, but somehow it worked perfectly. I would stare at his hands all night in a trance. It was deep. Like my dad’s guitar playing, nothing about it makes sense, but it makes perfect sense.”

“He was a freak pimp like for real,” Micah continued. “An OG freak who didn’t take any shit. He carried a pistol and had to use it more than once dealing with shady promoters. He looked after my dad for many years on the road, especially in those early days. He was never anything but kind to me.” Nelson’s daughter Paula echoed that sentiment: “He was my namesake. He was my godfather. He was my family. He and my dad walked me down the aisle. He was one of the coolest outlaws there ever was.”

A few hours after our interview at Gruene Hall, English made his usual journey over to Nelson’s tour bus to hang out 30 minutes before showtime. Soon he’d be onstage at the rickety but historic club, grinning as he played the shuffle to “Me and Paul” and breaking out shakers for Bobbie Nelson’s gospel instrumental “Down Yonder.” English had stuffed a portion of that night’s payment into a pocket of his black shirt, and several $100 bills could be seen spilling out. “It’s hard to give up,” English said of his job. “It really is.”

This site uses Akismet to reduce spam. Learn how your comment data is processed.