Exit/In: Inside the Last-Ditch Effort to Save Nashville’s Legendary Music Club

Fifty years after Jimmy Buffett took the stage for Nashville club Exit/In’s debut performance, the celebrated live music venue is in danger of closing for good. Last week, the building that houses Exit/In — the centerpiece of Nashville’s “Rock Block” and a proving ground for artists from Buffett and Waylon Jennings to R.E.M. and the Police — went under contract to be purchased by hotel-development group AJ Capital Partners. The Tennessee Lookout first reported the news of the impending sale.

Now, in a last-ditch effort to take control of the club, Chris Cobb — who operated Exit/In for the past 17 years and whose own bid to purchase the building with the venue-friendly Grubbs Properties group was rejected by the current owners — has organized a GoFundMe campaign to make a new offer directly to AJ Capital. The goal is to raise $200,000 to add on to what the new owners already paid for the building, sweetening the deal. “The Exit/In property has gone under contract to a firm that’s purchasing independent venues,” Cobb wrote. “We’re very concerned for the future of the club and have asked the firm to sell us the property, so we can continue to operate Exit/In in a manner that serves Nashville’s creative working class.”

Artists like Hayley Williams, Margo Price, Will Hoge, Kendell Marvel, and American Aquarium were quick to jump onboard with calls to save the Exit/In. Williams partnered with the retailer Hot Topic to donate 100% of proceeds of specially branded Paramore merch to the GoFundMe. “Help us save our rock music scene,” the Nashville resident wrote on social media.

Over the last four days, the GoFundMe has raised nearly half of its $200,000 goal — if the gambit fails, Cobb will donate the money to the National Independent Venue Association and Music Venue Alliance Nashville. But Cobb is hopeful that AJ Capital, who are headquartered in Nashville, will not only accept an offer over what they originally paid for the Exit/In building and a neighboring bar, but that they’ll recognize the importance of the venue to Nashville’s music history.

“It’d be great for them to be a part of the story of saving the club and helping us break this decades-old gentrification cycle that has ultimately taken out so many clubs across the country, and across the world, decade after decade,” Cobb tells Rolling Stone. “We have an opportunity to protect it, preserve it, and get it in the hands of the 17-year operators to make sure it can keep being what Nashville wants it to be.”

We asked Cobb to bring us up to speed on the sale, the campaign to save the club, and why exactly Exit/In resonates with so many of the artists who’ve performed there.

News that the Exit/In was under contract to be sold broke last week. Where do things stand today?
So it’s still the 50th anniversary of the club. That hasn’t changed yet. [Laughs] But what has changed is that the building is under contract, and not to us. We offered more and still didn’t get the bid.

What is the purpose of the GoFundMe campaign?
So we’ve asked AJ Capital to sell it to us, and basically flip it. And we want to be able to make the most compelling offer that we possibly can. We still have Grubbs’ backing, so we can pay [AJ Capital] as much as they paid for it without another penny, but we want to scrape together as many pennies as possible. And people just kept asking to help, so we wanted to be able to let people give if they want to.

Do you think the new owners will be receptive to your efforts?
I don’t know yet. I hope so. But they are in the process of moving their global headquarters here, their CEO moved here recently, and, for all intents and purposes, they’re local at this point…. So we’ll plead our case to our new neighbors and hopefully be able to offer them a little profit on not a lot of work. Hopefully they’ll listen. 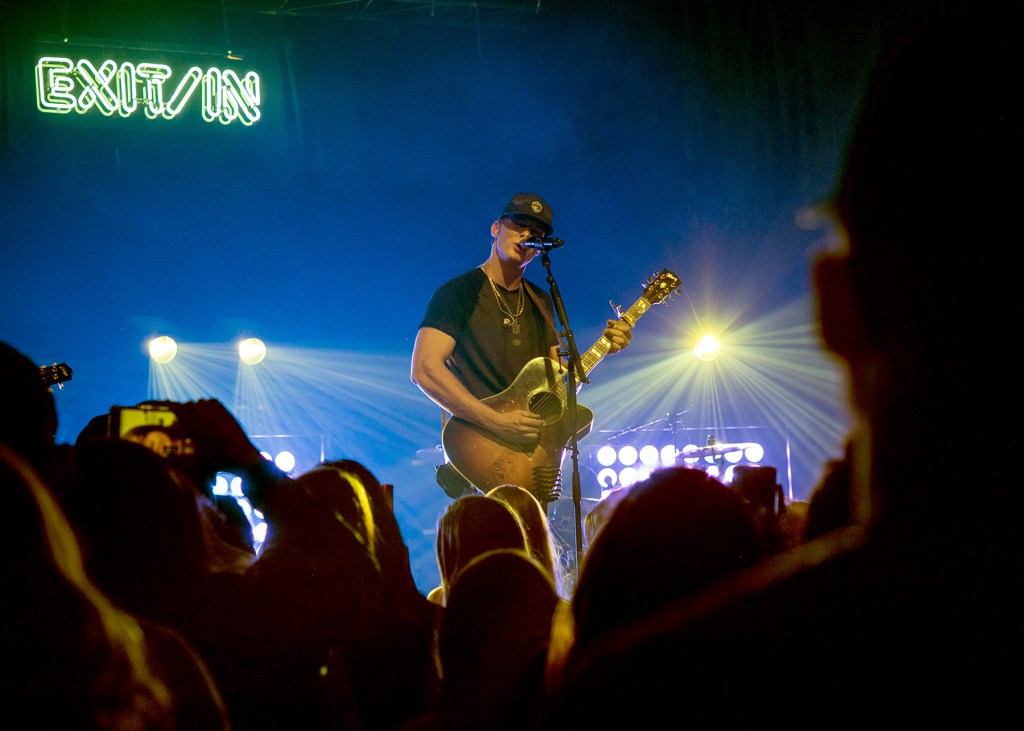 Parker McCollum performs at Exit/In in 2019.

But even if the sale goes through, they can’t evict you?
Yeah, I don’t think they can actually do that. We hold the lease and it’s a legally binding document. We can stay through the end of our lease should we choose to, which is a couple more years.

It may be blasphemy to suggest this, but could you move the Exit/In elsewhere?
The name has been part of the lease for longer than … it predates my 17 years there. But if their plan is to tear it down and build a luxury hotel, maybe they would sell the name. I mean, would we consider it to keep Exit/In alive? Sure. But it’s definitely a lot less attractive than keeping Exit/In where it’s been for 50 years. There’s magic in that space. You can feel it. You can’t recreate that.

Have you been surprised by the artist support?
I have a 13-year-old, so specifically getting tweeted by Hot Topic; that one surprised me. But God bless Hayley for being such a great member of the community. And it’s great to see Will Hoge and Margo speak up so, so strongly. Every time [I look at my phone], I see more and more artists coming to the support of the club. It’s great.

Why are they so invested in this particular club?
If you look at Twitter and start reading what artists are writing, you’ll quickly identify a theme, which is, “I had this unbelievable show on this stage very early on in my career.” And that’s been the theme since the first show ever in the club in September 1971, by Jimmy Buffett. That’s the connection piece. If you’re a band coming up out of Nashville, playing the Exit/In stage is a milestone and then selling Exit/In out is the next milestone. It’s been that way for a long time.

Do you think the club would be in danger of being sold were it not for the pandemic?
It accelerated the decision to sell, I’m sure of that. And it also is the reason you have groups like luxury hotel developers going after these types of properties. We wouldn’t be here right now if it weren’t for the pandemic. We have some opportunistic people out there right now that are seeing businesses that have struggled for over a year as opportunities. I was talking to a buddy in Florida yesterday and he’s got the same shit happening. It just sucks because it’s literally a global issue and it’s just so gross on the tail end of the pandemic. These places that have done everything we possibly can to survive, and this is what we get.