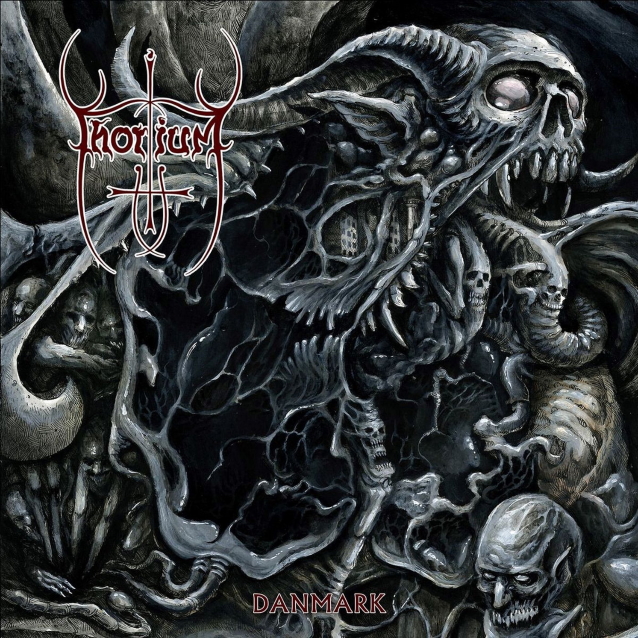 Death metal is often at its most effective when it conveys something more than just naked aggression. Sometimes, brutality and technique are enough, but when a band delivers every riff and growl as if they are directly channeling some dark, otherworldly force, that is when the magic happens. Despite a comparatively lowly reputation, THORIUM are exactly that kind of band. Only their fifth album in a 25-year career, “Danmark” exudes such a powerful sense of haughty, imperious disdain that you may reasonably wonder why the Danes are not vastly better known.

Effectively a showcase for the new line-up that assembled not long after the release of 2018’s “Blasphemy Awakes”, “Danmark” verges on being a masterclass in death metal songwriting. With a sound that is rooted in the grandiose brutality of records like MORBID ANGEL‘s “Domination” and HYPOCRISY‘s “Abducted” but with a tangibly blackened streak running through its slower, creepier moments, everything from opener “War Is Coming” to the closing “Into The Gods” oozes muscular authority. In truth, while THORIUM have never made a bad album, “Danmark” towers over all their past efforts, particularly when it comes to an album’s desired ebb and flow. It kicks off with the bombastic threats of “War Is Coming” and the mid-paced mutiny of “A Crown To Obscurity”, before hurtling down the deathly rabbit hole for “Majesty”; a warped, DEICIDE-tinged blizzard of blasts and scabrous thrash. In contrast, the profoundly unsavory “Semen Of The Devil” surfs along on pounding, quasi-industrial pulse that enables THORIUM to explore more daring dynamics.

Taking the tempo down to a worm-like slither, “The Silent Suffering” is a grim, instrumental interlude that provides a brief moment of restraint; “Defiance”, which follows, is a rugged and succinct slab of mildly ingenious, old-school perfection.

THORIUM save the best for last. “Reign The Abyss” is bleak, grandiloquent and seriously fucking hostile, with some of the best death / doom riffs in recent memory. “Nine Lives” weaves post-punk menace and jaw-cracking D-beats into an already successful formula; arguably the finest song here, “Into The Gods” is enjoyably CARCASS-like in its bewildering, non-stop stream of riffs and deft tempo shifts. None of it strays far from the beaten path, but this band have plainly honed their craft over the last quarter-of-a-century, and “Danmark” is both a definitive statement and a deeply classy show of strength.

Profound MoralityChurch RoadTrack listing:01. Abaddon02. Coalescence03. Carmine (Fills The Hollow)04. Near Vision05. Mutagen06. Enter the Flesh07. Abattoir08. Profound MoralityThere are lots of exciting things happening in UK heavy music right now, and HERIOT can be added to that list without hesitation. "Profound Morality" is a very modern, post-everything piece of work. Hewn from various excoriating elements of extreme metal, hardcore, post-rock and industrial, this is a 21-minute slap to the side of the head that will have your ears ringing for days. It is particularly satisfying that HERIOT […]