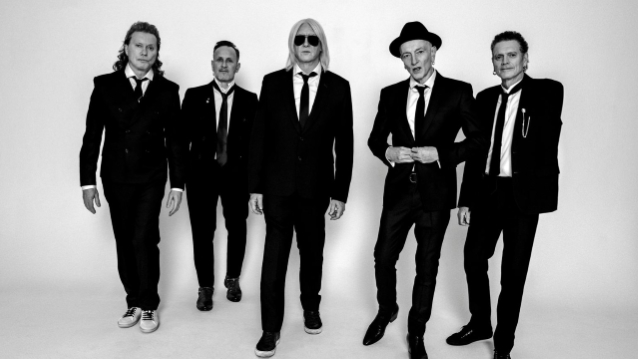 DEF LEPPARD is set to launch “The Stadium Tour” with MÖTLEY CRÜE and guests POISON and JOAN JETT & THE BLACKHEARTS on June 16 in Atlanta, Georgia. The 36-date trek, which is due to wrap September 9 in Las Vegas, was originally scheduled to take place in the summer of 2020 but ended up being pushed back to 2021, and then to 2022, due to the coronavirus crisis.

During an appearance on a recent episode of the GUNS N’ ROSES-centric “Appetite For Distortion” podcast, DEF LEPPARD guitarist Vivian Campbell was asked how it feels to finally be returning to the road after taking so much time off from playing live. “Definitely eager,” he said (as transcribed by BLABBERMOUTH.NET). “I think we’re all very eager to get going on this. It’s been a long time for us. This will be the longest time we have ever not played together as a band, which is why we’re scheduling so much rehearsal time. Having said that, I anticipate… Here’s how rehearsals are gonna go: the very first day, we’re gonna sound awful, dreadful; it’s gonna be embarrassing. We’re all gonna look at each other and think, ‘What the hell happened? What went wrong?’ And by day two, it’s gonna be, ‘Oh, that’s much better. That sounds like DEF LEPPARD.’ And by the end of the first week, I think we’ll probably be good to go. But we’re definitely scheduling more than one week; I think we have about three weeks scheduled for rehearsals. But it should be good.

“I started doing shows again last summer with my side band, LAST IN LINE, and we went to Las Vegas and rehearsed for a couple of days,” he continued. “And the first day we were in the rehearsal studio playing together, we were embarrassingly bad, and I just couldn’t believe it. So I had that experience. So I anticipate that the first day of DEF LEPPARD rehearsals is gonna be, ‘Hmmm… What went wrong here?’ But it’ll come back quick. It always does. You just have to find that connection again.

“The strange thing about when a band plays live, it’s not only the notes that you play but it’s the space between the notes — it’s that air in between that really defines the chemistry of the band,” Vivian explained. “You’ve gotta be in synch with each other; you’ve gotta be breathing in at the same time and breathing out at the same time, metaphorically speaking. But it’s something that all good bands have. But I did notice from my experience with LAST IN LINE that when you take a couple of years away from it, it takes at least 24 hours to come back.”

Late last month, DEF LEPPARD singer Joe Elliott told QFM96‘s “Torg & Elliott” radio show that “both” DEF LEPPARD and MÖTLEY CRÜE will close the show on “The Stadium Tour”: “We’re taking turns,” he explained. “[There are] 36 shows, so it’s 18 each. It’s all been worked out very scientifically. It’s the same way that we did it with JOURNEY in 2018 — exactly the same principle.”

DEF LEPPARD‘s new album, “Diamond Star Halos”, will be released on May 27 via UMe. The 15-song follow-up to 2015’s self-titled LP was produced by the band and longtime engineer Ronan McHugh.

Over the past two years, DEF LEPPARD recorded “Diamond Star Halos” simultaneously in three different countries with Elliott in Ireland, bassist Rick Savage in England, and guitarists Phil Collen and Campbell and drummer Rick Allen in the United States. The band also enlisted Alison Krauss and David Bowie pianist Mike Garson to guest on the LP.

The history of rock guitar — and rock music in general — can be split into two periods: before Jimi Hendrix's debut album and after.It's difficult to overstate the impact of the Jimi Hendrix Experience's earth-shattering Are You Experienced. On a micro level, it plucked the musician born James Marshall Hendrix out of chitlin' circuit obscurity and launched him onto the biggest stages around the world, turning him into a countercultural icon and archetypal guitar hero. On a macro level, it helped the LP supersede […]