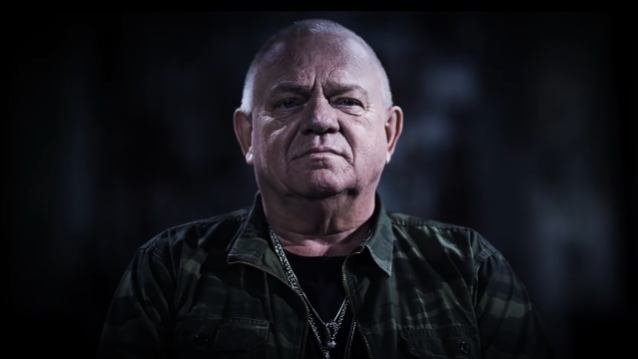 Former ACCEPT frontman Udo Dirkschneider, who attracted a lot of attention in the early 1980s by sporting short blond hair, camouflage pants and military boots, discussed the inspiration for his then-look in a new interview with We Go To 11. He said (as transcribed by BLABBERMOUTH.NET): “In ’82, [ACCEPT‘s] management was looking was something different, to do something different with the band. And then, for some reason, we ended up in a military shop. And then they said, ‘Why don’t you put this on?’ Blah blah blah blah blah. And then I came out of the cabin and then they said, ‘Wow. That looks good.’ And I said, ‘Are you sure?’ [Laughs] I had long hair [at the time]. And then, yeah, I said, ‘Okay. Yeah. I can wear that. No problem.’ And of course, I’m open-minded. If they wanna do something a little bit different, no problem. And a couple of days later, the management [said to me], ‘Can you also cut your hair?’ I said, ‘No. Come on. This is a joke.’ [Laughs] But in the end, okay, I did this also. And then, let’s say, the image of Udo was born.”

According to Dirkschneider, his look has evolved slightly over the years. “Sometimes I change a little bit,” he said. “Sometimes I [wear] just a black shirt and just the trousers are camouflage. And also — I don’t know when this was exactly — but I tried to get away [from] this. And then the people said, ‘No. No. You cannot do this. It’s a trademark.’ So I can live with that.

“But I think it was at this time, when we [first] did this [with ACCEPT], in a way military stuff, that was completely different… Nobody really did this at this time. And, yeah, so it worked. I think ACCEPT was quite successful. And here we go.”

Udo is currently promoting his latest solo album, “My Way”, which was released on April 22 via Atomic Fire Records. Billed as “his most personal and extraordinary album to date,” the effort contains 17 cover versions of the very songs that have influenced the 70-year-old musician and singer the most. All kinds of classics from music history are among them — including those that you might not expect from Udo.

Seven years after announcing that he would embark on a special tour during which he would perform ACCEPT songs one last time under the DIRKSCHNEIDER banner before closing that chapter for good, Udo is continuing to play ACCEPT material at select shows.

A year ago, Udo confirmed to Canada’s The Metal Voice that U.D.O. will “definitely” play some ACCEPT songs if the band’s North American tour materializes in 2022 or 2023.

Dirkschneider said in 2016 that his vow to never play ACCEPT material again came with one caveat. “If the band ACCEPT dissolves one day in the near future and I am still around with U.D.O., then there is a chance that I put ACCEPT songs back in the setlist,” he said. “But currently there is ACCEPT, so go see them [if you want to see those songs performed live]. They are playing these songs.”

Udo previously said the original plan was for DIRKSCHNEIDER to only “a few shows,” and “then [the tour] got bigger and bigger [due to demand].” But, he added, “I don’t want to complain about that.”

25 Years Ago: The ‘Karma Police’ Catch Up With Radiohead

In the ’90s, eastern religions and alternative rock became intertwined. The decade’s defining band named themselves after Buddhism’s ultimate goal, alternative rock’s coolest artists (including Radiohead) participated in the Tibetan Freedom Concerts and many a Lollapalooza vendor wrote “karma” on their tip jars.Radiohead singer Thom Yorke became interested in Buddhism and began to “dabble” in the religion, although that’s hardly the inspiration for “Karma Police,” OK Computer’s sixth track and second single. Rather, the spooky ballad was the result of […]