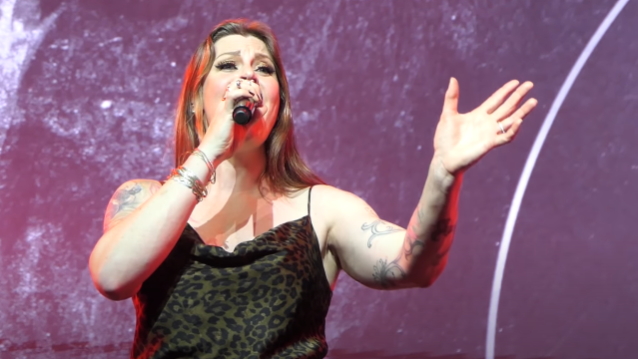 NIGHTWISH singer Floor Jansen, who recently released a new solo single, “Fire”, spoke to Metal Rules about her decision to launch a solo career nearly 25 years after she joined her first band. She said (as transcribed by BLABBERMOUTH.NET): “People need to know that NIGHTWISH and my solo career are not biting each other. I know that voices have been risen with concern — considering the fact that now I have a solo career, people are afraid I might leave NIGHTWISH because of it. And I just wanted to stress out that I will not. NIGHTWISH is forever in my heart; I can’t imagine leaving it. And solo is there to be on the side of it. And I find it super exciting and very enjoyable, but I’m not gonna leave NIGHTWISH.”

When interviewer Marko Syrjala pointed out that other members of NIGHTWISH have also pursued side projects over the years, Floor concurred. “That’s it,” she said. “So indeed there’s AURI; there’s BROTHER FIRETRIBE; Tuomas [Holopainen, NIGHTWISH keyboardist and main songwriter] has been releasing music on the side for many years, and everybody is liking doing different things and being musically engaged in different projects. And I think that’s very healthy. It should not bite each other. But we do need to agree on the fact that NIGHTWISH is always the big brother; [it is] the priority for us all.”

As part of NIGHTWISH, Jansen has landed two Number One albums in Finland, and Top Five albums in Austria, France, Germany, Greece, Hungary, the Netherlands, Norway, Sweden and Switzerland.

Born in the Netherlands, Jansen joined her first band, one of the world’s first symphonic metal acts, AFTER FOREVER, when she was only 16 years old. The group went on to release five albums from 2000 to 2007, before they broke up in 2009.

Jansen‘s next band, REVAMP, released two albums in 2010 and 2013, before she joined NIGHTWISH as a full-time member. NIGHTWISH‘s first album with Jansen as the lead singer was 2015’s “Endless Forms Most Beautiful”, which landed in Top 10s around the world. This was followed by 2020’s “Human. :II: Nature.” , which was also an international success.

Jansen has toured extensively with the band and appeared on three of NIGHTWISH‘s live albums “Showtime, Storytime”, “Vehicle Of Spirit” and “Decades: Live In Buenos Aires”.

In 2019, Jansen participated in the popular Dutch TV show “Beste Zangers” where she scored a big hit with “Phantom Of The Opera” together with Henk Poort. She was recognized with a Dutch Popprijs award — a prestigious accolade for artists that has made important contributions to Dutch music. In the same year, her first solo tour sold out in less than 24 hours.

Jansen performed live with NIGHTWISH for the first time on October 1, 2012 at Showbox Sodo in Seattle, Washington following the abrupt departure of the band’s lead singer of five years, Anette Olzon. Jansen officially joined NIGHTWISH in 2013.

Last year, Holopainen said in an interview that NIGHTWISH would split up if Jansen ever chose to leave.

May 10, 2022RAGE AGAINST THE MACHINE guitarist Tom Morello will be among this year's recipients of the Spirit Of John Brown Freedom Award. The award will be presented May 14 at the John Brown Farm State Historic Site, located just outside the village of Lake Placid in New York state's Adirondack Mountains. Also set to be honored are choreographer Tiffany Rea-Fisher and visual artist Karen Davidson Seward.The Spirit Of John Brown Freedom Award honors women and men whose work invokes […]