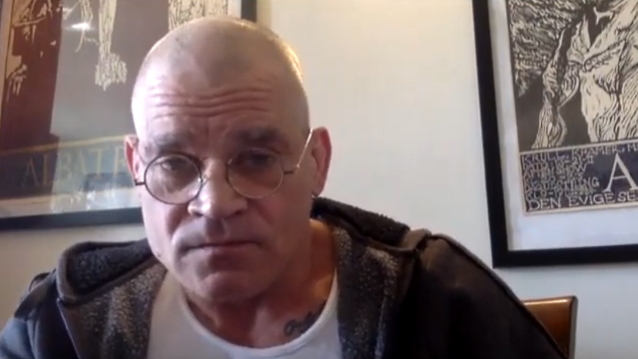 During an appearance on “Talking Bollocks”, the monthly metal podcast hosted by ACID REIGN frontman-turned-stand-up-comedian Howard H. Smith, Harley Flanagan, who founded the legendary hardcore band the CRO-MAGS at the age of 14, was asked if he thinks the classic lineup of the CRO-MAGS will ever reunite. He responded (as transcribed by BLABBERMOUTH.NET): “Nah, really, sadly, I don’t. And you know what? For those of you who’ve followed my social bullshit media and all that, you see that I’ve been over it for many, many years. I’ve extended the olive branch to all these fucking guys a gazillion times. Even with all the bickering that has gone on, back and forth, I’ve always been willing to talk, I’ve always been willing to try to see what everybody could do to fucking just make everybody walk away feeling whole on some level. Nobody’s ever gonna be happy about anything because everybody’s too bitter, everybody’s too pissed off, everybody’s too old. But I tried and I fucking tried and I tried, and all I really got back was a lot of negativity and hostility and bitterness. And that ship has kind of sailed.

“I’m always willing to talk, because at the end of the day — and I said this to all of them — we have the ability to make so many fucking people happy, to just give them that moment, and if that doesn’t matter to you, if you can’t get past your own bullshit for 45 minutes… That first album was only like a half-hour long; if you can’t put your bullshit aside and get on some sort of platform and play together for 30 minutes and make all those people fucking happy, then you know what? Then you don’t really deserve those fans. If you can’t give them that, then they shouldn’t give you shit. You don’t deserve it.

“I don’t know if anybody’s noticed, but me and old JJ [former CRO-MAGS frontman John Joseph], we stopped talking shit about each other a long-ass time ago,” he continued. “When the whole settlement ended, that was it, man; we fucking let it go. That was part of our agreement. It was, like, ‘This shit, when the smoke settles, it’s done. Let’s move on with our lives. Leave me out of the press. I’ll leave you out of the press. I’ll only ever say something that’s true or something that’s nice or funny or whatever. I’m just done. I’m done.’ And I asked the same of everybody. I’m, like, who wants to get on stage and play with somebody who’s actively shitting on them, actively wiping their ass with their face every time they open their mouth? I’m supposed to get up on stage with you when you just talked all kinds of bullshit and I know the history — I actually know the history— and you’re gonna keep running your mouth and I’m supposed to get up and look at you without punching your fucking teeth down your throat? Fat fucking chance, bitch. Let’s have a conversation like two motherfucking men.

“I ain’t trying to prove… Look, I’m not a bully. I’m a motherfucking grown-ass man,” Flanagan added. “I don’t give a fuck. I don’t need to intimidate anybody with my toughness and shit like that. I’ve kicked enough asses in my time; I don’t care. But if these motherfuckers ever wanted to have a conversation, we could have a conversation. But just let it be known — it cost me motherfucking over 250K [$250,000] in my legal entanglements just to fucking get the shit locked down that I owned. That whole fucking legal bullshit was just to get those dudes to stop playing under a trademark that they didn’t actually own. I owned the trademark.”

In 2019, Flanagan reached a settlement with Joseph and drummer Mackie Jayson regarding ownership of the CRO-MAGS name. Flanagan is now performing under the name CRO-MAGS while Joseph and Jayson are performing as CRO-MAGS “JM”.

In 2018, Flanagan sued members of CRO-MAGS for allegedly using the band name without his permission. Claiming that CRO-MAGS was his idea when he formed it back in 1981, Flanagan filed a lawsuit against the then-lineup of the group — including Joseph — in part for copyright infringement, saying he trademarked the “Cro-Mag” name for recording in 2010 and for merchandise in 2009 and then again in 2017. Harley claimed in the lawsuit that the other members of the CRO-MAGS took over the band around 2002 when “Flanagan‘s first son was about to be born… and Flanagan had to stop touring to help with the baby.”

In July 2012, Flanagan was arrested in New York City on charges of attacking several members of the CRO-MAGS during the CBGB Festival. Flanagan, who had been a panelist at one of the event’s seminars, allegedly attempted to attend the concert of his former band. At the time, Joseph told the New York Post he and Flanagan started the band together in the early ’80s, but Flanagan continually took all the credit for himself. Joseph claimed the situation got so bad, Flanagan pocketed every cent from their 1986 tour. “That caused me to lose my apartment and be homeless in 1987,” John said. “I lived hand to mouth.” In a separate interview with The New York Times, Joseph said that Flanagan “has been a negative thorn in the side of this band forever.”

The history of the CRO-MAGS is integral to the history of hardcore, its evolution from punk and the development of alternative music genres such as hardcore, cross-over, thrash metal, post punk and grunge, to name a few. Numerous iconic bands from METALLICA to GREEN DAY, and individuals such as Dave Grohl have credited CRO-MAGS with having had a primal influence on their development.

Born out of the violence and depravity of the Lower East Side of New York in the late ’70s and early ’80s, the CRO-MAGS was the brainchild of a very young Flanagan (at the time 14 years old) when still playing with THE STIMULATORS. By 1982/83 he wrote and recorded the very first CRO-MAGS demos consisting of four songs that would become the blueprint for the debut album, “The Age Of Quarrel”. He wrote all of the music, played each instrument and sang. Before long, he connected with Parris Mayhew and the two started writing music and auditioning band members.

Tami Neilson and Willie Nelson meditate on heavy losses in their new duet “Beyond the Stars,” released alongside a video on Wednesday. The song will appear on the Canada-born, New Zealand-based Neilson’s upcoming album Kingmaker. “Beyond the Stars” is a mournful ballad in 3/4 time and it takes a close look at the grief brought on by a loved one’s death. Neilson wrote the song after the 2015 loss of her father and, while Nelson acts as her father’s voice […]

May 25, 2022L.A. GUNS have announced a 40-date U.S. tour for this spring, summer and winter. The trek will kick off on June 1 in Liverpool, New York and will run through New Year's Eve in West Hollywood, California.Confirmed shows:Jun. 01 - Sharkey's Banquets & Events - Liverpool, NY (with […]