Billy Joe Shaver, the outlaw-country music pioneer who wrote some of the genre’s greatest songs, died Wednesday in Waco, Texas, after suffering a stroke. He was 81. Connie Nelson, a friend of Shaver’s, confirmed his death to Rolling Stone.

Shaver’s hard-lived career classics included “Honky Tonk Heroes,” “Georgia on a Fast Train,” “Old Five and Dimers Like Me,” and “Live Forever.” He wrote 10 out of the 11 songs on Waylon Jennings’ 1973 outlaw-country breakthrough, Honky Tonk Heroes; Kris Kristofferson, Johnny Cash, and Elvis Presley all recorded his songs; and in 2010, Willie Nelson called him “the greatest living songwriter.”

Shaver lived the outlaw lifestyle that others only sang about. In 2007, he was charged with shooting a man in the face at a bar near his home in Waco. The trial drew friends including Nelson and the actor Robert Duvall in support of Shaver, who was ultimately found not guilty and went on to turn the ordeal into a song, “Wacko From Waco.”

Born in Coriscana, Texas, on August 16th, 1939, Shaver was raised by his mother, Victory, and would later leave town to find a job working at a honky-tonk in Waco. He would often accompany his mother to her job at the local nightclub, where he became exposed to country music. In the early Sixties, Shaver moved to Houston and frequented a club called the Old Quarter, where he met Townes Van Zandt. They became drinking buddies, and their friendship led Shaver to Nashville. He scored an apprenticeship for songwriter Harlan Howard before working for singer-songwriter Bobby Bare.

But Shaver had a hard time breaking through in Nashville, where he was rejected by artists like Chet Atkins. He found a fan in Kris Kristofferson, who recorded his song “Good Christian Soldier” for his debut album. In 1971, Kristofferson invited Shaver to play the Dripping Springs reunion — which inspired Willie Nelson to host his revered annual picnic — in Austin. Shaver’s performance at the picnic was famously uneven, but afterward, he attended a songwriting circle where he played “Willy the Wanderin’ Gypsy and Me,” a soaring ode to Nelson. Jennings liked what he heard. “He said, ‘Do you got any more of them cowboy songs?” Shaver recalled to Rolling Stone in 2010. “I said, ‘I got a sack full of them.”

Jennings promised to listen to those songs. But for weeks, Shaver didn’t hear anything. “I wasn’t used to that drunk talk where they get high and say they’re going to do something and don’t do it.” Shaver traveled to Nashville to seek out Jennings at a recording studio. “I told him, ‘If you don’t listen to them, I’m going to whip your ass right here in front of God and everybody,’” Shaver said in 2010. “And I was ready.”

Jennings listened to the songs, including the swampy “Honky Tonk Heroes,” which became the title track of his next album. “He just slapped his leg and said, ‘I know what I got to do,’” Shaver said. Jennings’ 1973 LP Honky Tonk Heroes became one of the defining albums of outlaw country, but Shaver couldn’t catch a break as a mainstream artist on his own. After his debut album, Old Five Dimers, was released in 1973 by Monument, the label went out of business. Shaver’s drug use escalated — one night in the mid-Seventies, he drove his car through the plate-glass window of a car dealership.  “I was welcome anywhere I went because I wrote good music that entertained entertainers,” Shaver said. “It’s just that I didn’t have the management and stuff like that. They said I was unmanageable.”

In fact, Shaver’s life was peppered with tragedy. When he was 21, he lost two fingers on his right hand in a sawmill accident (“I ain’t no finger-pointer,” he would joke. “I can’t”). He married one of his wives, Brenda, three separate times and lost her to cancer in 1999. Around that same time, his mother (whom he sang about in “My Mother’s Name Is Victory”) died. Then on the morning of December 31st, 2000, his son and creative partner Eddy Shaver, a fiery guitarist who recalled Stevie Ray Vaughan, was found dead of a heroin overdose.

A grieving Shaver performed that same evening at a New Year’s Eve concert with Nelson. “Willie put a band together. My band just went nuts, they all flaked out and went off crying and stuff. But Willie called me up … and said, ‘Billy, you gotta get back on the horse,’” Shaver said. “And I’m an old cowboy, I know what he’s talking about. So I got up there.”

Shaver told Rolling Stone he considered taking revenge for his son’s death — until Nelson’s cooler head prevailed. “I knew where [the drugs] came from — that drug dealer, I would have shot him up and killed him instead of calling the police,” he said. “But Willie talked me out of it. He said, ‘You’re best just leaving it alone.’ And I did. I just left it alone. But you don’t ever forget something like that.” 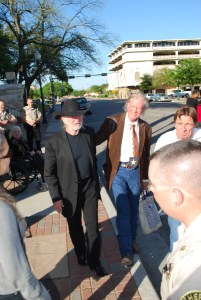 Billy Joe Shaver and Willie Nelson, following Shaver’s courtroom appearance for shooting a man in the face in 2007.

Shaver trudged forward, releasing the final album he and Eddy had recorded, The Earth Rolls On, in April 2001. Freedom’s Child came in 2002, and in 2007 he released what would be his last studio album for nearly seven years, Everybody’s Brother.

That same year Shaver stopped into a Lorena, Texas, bar for a beer with his former wife Wanda, and ended up in an altercation with a patron. Shaver testified the man was rude to his wife and told Shaver to “Shut the fuck up.” After the two went outside, witnesses testified Shaver asked the victim, “Where do you want it?” and then pointed a .22 pistol at his cheek and pulled the trigger. Shaver claimed self-defense and was acquitted. “I am very sorry about the incident,” Shaver said afterward. “Hopefully things will work out where we become friends enough so that he gives me back my bullet.”

Despite never having a solo career as successful as the peers who cut his songs, Shaver’s solo recordings (and with Eddy as the duo Shaver) are country-music essentials: “Georgia on a Fast Train,” “Tramp on Your Street,” and “You Asked Me To,” among them. His optimistic track “Live Forever” became his signature song, with Shaver performing it onstage with arms outstretched. A devout Christian, he’d dramatically drop to his surgically repaired knees during “You Can’t Beat Jesus Christ,” an irreverent prayer in which Shaver calls his savior a “compound country kinda guy.” He further preached his faith in the equally rambunctious “Get Thee Behind Me Satan,” with John Anderson.

In 2014, Shaver released his final album, Long in the Tooth, which featured the duet “Hard to Be an Outlaw” with Willie Nelson. He professed his lifelong commitment to songwriting in a sprawling interview with Rolling Stone that same year, drinking Red Bulls he kept in a tattered bag at his feet.

“Not everyone can be dedicated to it. I’m a songwriter first and then whatever else I do second… I enjoy the heck out of entertaining and I enjoy all the aspects of what comes with it, but the song is like the cheapest psychiatrist there is,” Shaver said. “And I pretty much need one all the time.”

Shaver recorded and toured up until his death. In January, he joined Tanya Tucker onstage at Nashville’s Ryman Auditorium to perform “I’m Just an Old Chunk of Coal.” In 2004, Shaver was inducted into the Nashville Songwriters Hall of Fame. But while he’s mentioned in the Country Music Hall of Fame’s exhibit devoted to outlaw country, his own induction has eluded him — an oversight that continued to confound the ornery Shaver.

“If you don’t want to put me in there, that’s fine. But I just don’t understand it to tell you the truth,” he said. “I feel like I am part of the foundation and maybe even a cornerstone. I think I’m that much.”