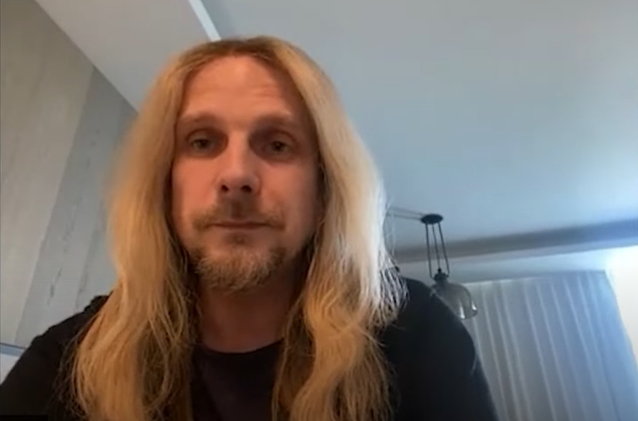 In a new interview with Keefy of Ghost Cult, JUDAS PRIEST guitarist Richie Faulkner spoke about the progress of the songwriting sessions for the band’s follow-up to 2018’s “Firepower” album. He said (as transcribed by BLABBERMOUTH.NET): “We’re in the process of putting it together. Obviously, that process has been stalled somewhat due to COVID the last couple of years. Now that [the COVID restrictions] have been lifted, we’re now on a touring cycle. So now there’s that challenge to deal with in terms of putting the record together. But we’re gonna try to work around it. In between tour legs, we’re gonna try to get the stuff recorded.

According to Faulkner, the new PRIEST album is already written. “It’s kind of in demo form,” he explained. “We’ve got a batch of songs in demo form that are ready to be recorded properly, and we’ve got the drums done. Everything else needs to be done, really. So in terms of being written, it’s written, but we need to record it properly and everything like that. So it’s not really anywhere near done. But when it’s done, it’s done.”

This past February, Halford was asked by Remy Maxwell of Audacy Check In if he agreed with Faulkner‘s recent comment that the band’s upcoming album will be more musically “progressive” than “Firepower”. He responded: “Yeah, the metal is there. But here’s the thing: we’ve tried our best not to replicate anything that we’ve done. From ‘Rocka Rolla’ all the way through to ‘Firepower’, each record has had a distinctive character. And it’s tough because fans go, ‘We want another ‘Painkiller’,’ ‘We want another ‘British Steel’.’ And [it’s, like], ‘Dude, we’ve already done that.’

“Fans know that we’re a band that is always full of adventure and trying new stuff,” he continued. “And so, yeah, this has got probably some more progressive elements that we’ve never really delved into before. And that’s exciting, because, again, it gives us and our fans another opportunity to see a different side of PRIEST. But it’s still metal. There’s just more of it. There are more notes than there were before.”

Also in February, Faulkner told Canada’s The Metal Voice about the overall sound of the new PRIEST music: “Whenever you start a record, you never know how it’s gonna turn out. So you might start with an idea of what it’s gonna be, and as it kind of rolls on, it comes out something different. So you don’t quite know. And also it’s really hard to sum up your own music, I find, without sounding really pretentious. But I think this one — it’s not ‘Firepower 2’, I don’t think. It’s its own thing, it’s its own animal. If anything, I would say it’s a bit more progressive in places, and in places it’s got a bit more of that ‘Killing Machine’ swagger.”

Faulkner added: “I know everyone says, ‘Oh, is it the next ‘Painkiller’?’ or ‘Is it the next…?’ whatever… I don’t know if they’d ever done it, but I know we’ve never done it when I’ve been in the band; we’ve never tried to recreate an album. It’s always we try to create an album that stands on its own legs. So I think it’s definitely a little bit more progressive than ‘Firepower’ and, as I said, in places it’s got a little bit of that ‘Killing Machine’ angry swagger attitude going on. But again, as I said, we’re waiting to see what it turns out like, ’cause it could turn out completely different.”

A year ago, Halford confirmed that PRIEST‘s next album will see the band reuniting with the “Firepower” production team consisting of Andy Sneap, longtime collaborator Tom Allom and engineer Mike Exeter (BLACK SABBATH).

Bassist Ian Hill is the sole remaining original member of PRIEST, which formed in 1969. Halford joined the group in 1973 and guitarist Glenn Tipton signed on in 1974. Rob left PRIEST in the early 1990s to form his own band, then came back to PRIEST in 2003. Founding guitarist K.K. Downing parted ways with the band in 2011, and was replaced by Faulkner.

Tipton was diagnosed with Parkinson’s disease eight years ago after being stricken by the condition at least half a decade earlier. Tipton announced in early 2018 he was going to sit out touring activities in support of “Firepower”. He was replaced by Sneap, who is also known for his work in NWOBHM revivalists HELL and cult thrash outfit SABBAT.

Faulkner suffered an acute cardiac aortic dissection during the band’s performance at the Louder Than Life festival in late September. He was was rushed to the UofL Health – Jewish Hospital where the cardiothoracic surgery team needed approximately 10 hours to complete a life-saving surgery.

Timothy B. Schmit has released "Heartbeat," the second single from his upcoming album, Day by Day.The R&B-tinged song is accompanied by a lyric video, which can be viewed below.Last month, Schmit released the first single, "Simple Man," gearing up for the release of Day by Day, which will arrive on May 6. Even though this is his seventh solo album, Schmit still considers himself a "developing" songwriter. "I didn’t hit my stride as a songwriter during my younger years," he said in an earlier press […]