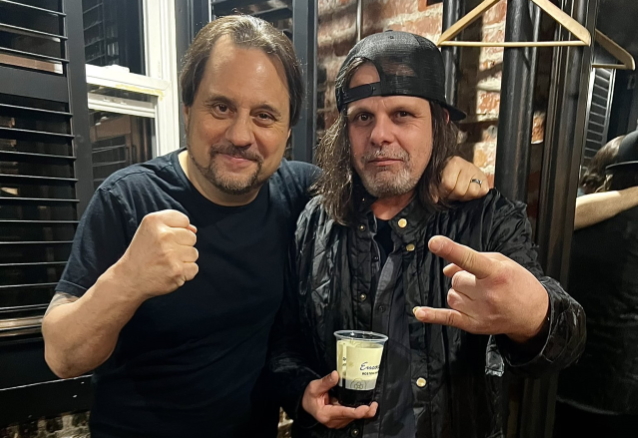 TESTAMENT guitarist Alex Skolnick has shared a photo of the band’s current touring drummer Dave Lombardo and original TESTAMENT drummer Louie Clemente, taken backstage before the group’s May 5 concert at The Paramount in Huntington, New York.

Clemente was part of TESTAMENT‘s lineup when a European promoter convinced the remaining “Legacy”-era players to reunite for one show in 2005, which turned into a tour. In 2006, Clemente‘s arthritis forced him to bow out, and TESTAMENT ultimately recruited ex-SLAYER/FORBIDDEN drummer Paul Bostaph.

In a 2006 interview with Rock My Monkey, TESTAMENT guitarist Eric Peterson stated about Clemente‘s latest exit from the group: “He started getting some pains in his wrists. This came up last time. Jon Allen filled in for him for some shows we had done in the past. In particular one I can remember was the last one we just did in Italy, Gods Of Metal. And then he said he was all better, and he just kind of… He said he was alright, and at the last minute — I think he got cold feet at the same time. I don’t know. I really don’t know what the real story. But we’re being told that his hands are hurting or something.”

Lombardo rejoined TESTAMENT earlier this year as the replacement for Gene Hoglan.

“The Gathering” was widely considered to be an improvement over 1997’s “Demonic”, an album that saw singer Chuck Billy employ a more guttural style of vocals and was released at a time when thrash acts as TESTAMENT had fallen out of favor.

Hoglan originally played drums on “Demonic”, but didn’t stick around long enough to do any touring with the band. He officially joined TESTAMENT in 2011 and played on the group’s last three albums: 2012’s “Dark Roots Of Earth”, 2016’s “Brotherhood Of The Snake” and 2020’s “Titans Of Creation”.

FULL CIRCLE (like the shape of a drum):
Here’s a special backstage highlight, moments before showtime, May 5 @TheParamountNY –

Opened in 1932, Radio City Music Hall has been called the largest indoor theater in the world – with a marquee that spans an entire city block in Manhattan. For decades, however, it played host to only a certain kind of music.Patrons would hear vaudeville and movie musicals at first, then musical stage productions like the Rockettes, which began a year later. Opera joined Radio City's slate alongside the now-legendary Christmas Spectacular in 1934.Several of Hollywood's most famous productions premiered […]