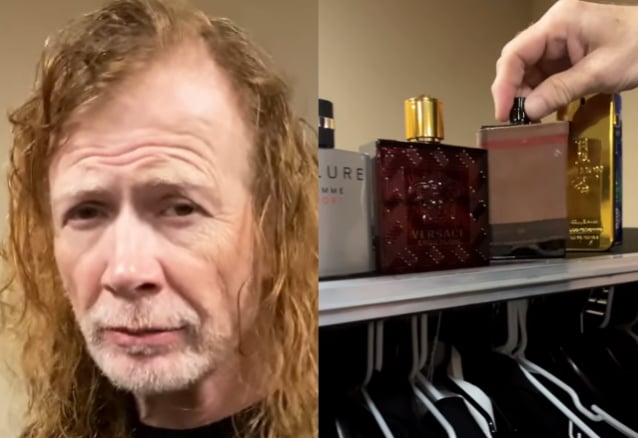 MEGADETH‘s Dave Mustaine has shared his recommendations on the best fragrances for men. Earlier today, the 60-year-old guitarist/vocalist uploaded a short video to social media in which he offered a “road-case breakdown” of his colognes while on the road as part of “The Metal Tour Of The Year”, featuring headliners MEGADETH and LAMB OF GOD, along with support acts TRIVIUM and IN FLAMES. Among the fragrances that Mustaine promotes in the video are those from Allure, Versace, Burberry and 1 Million.

Mustaine celebrated his 60th birthday on September 13, 2021 at MEGADETH‘s concert at the Leader Bank Pavilion in Boston, Massachusetts. At the show, the audience sang “Happy Birthday” to Mustaine, after which a five-minute video was played in which a number of other musicians shared their best wishes to Mustaine, including GUNS N’ ROSES‘ Slash, Ozzy Osbourne, MÖTLEY CRÜE‘s Nikki Sixx, KORN‘s Brian “Head” Welch, Ice-T and members of LAMB OF GOD and TRIVIUM.

An early member of METALLICA before being kicked out in 1983, Mustaine feuded with his former bandmates for more than two decades before finally patching things up over the last decade.

Commenting on MEGADETH‘s nearly four-decade existence, Mustaine told New Zealand’s Stuff in a 2013 interview: “Time flies. 30[-plus] years seems like a long time, but boy, it’s over so quick. Sometimes I sit back and think how many things have happened over the years, and I guess the thing that makes me feel the best is when I see how many people who’ll say, ‘We met at a concert,’ ‘We got engaged at a concert,’ ‘We got pregnant at a concert,’ all these things that they share. These landmarks, these mementoes, they’re really cool.”

He continued: “I never thought I’d be doing this this long; it’s crazy. And the fact we can have fun doing what we do, on top of that, just makes it so much more enjoyable.”

Asked in a 2016 interview with FaceCulture to explain his longevity, Mustaine said: “I don’t know. I’m sure there’s a lot of people that wanna know. [Laughs] I think it’s just being honest to people. Sometimes people don’t want you to be honest with them. [I am honest] sometimes to a fault. I think sometimes I can be blunt, and I think that it’s hurt people. It’s hurt me. There’s things I’ve said I regret. But would I change anything? No. I love being right here at this moment, and if I changed anything, who knows where we’d be?”

THE QUIREBOYS founder, frontman and songwriter Spike has announced that he has started writing new QUIREBOYS songs with the band's co-founder Guy Bailey. The material heralds the beginning of a new studio album and a new QUIREBOYS lineup that Spike is putting together for dates later in the year.The news follows the public statement made by three of Spike's former bandmates expressing a desire to part company with the singer, although Spike has always maintained he has never, and would […]