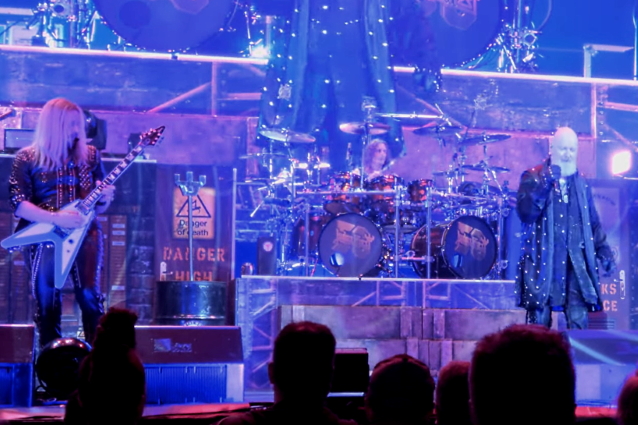 Fan-filmed video of the final show of JUDAS PRIEST‘s 2022 North American tour, which concluded last night (Wednesday, April 13) at FirstOntario Centre in Hamilton, Ontario, Canada, can be seen below. The trek kicked off on March 4 at Peoria Civic Center in Peoria, Illinois and featured support from QUEENSRŸCHE.

PRIEST is scheduled to launch a European tour on June 3 in Gdańsk, Poland. The trek will run through August 4 at the Wacken Open Air festival in Wacken, Germany.

The British heavy metal legends were forced to cancel their April 4 concert at Tsongas Center at UMass Lowell in Lowell, Massachusetts after singer Rob Halford came down with “a bit of a cold,” according to JUDAS PRIEST guitarist Richie Faulkner.

PRIEST returned to the live stage on April 7 at Scotiabank Centre in Halifax, Nova Scotia, Canada. It marked the band’s first performance since April 2 when PRIEST played at the Premier Theater at Foxwoods Resort Casino in Mashantucket, Connecticut.

Fans who attended PRIEST‘s concert in Mashantucket reported that Halford seemed to be feeling sick and was struggling to hit the high notes during the band’s set, as evidenced in some of the fan-filmed video clips which have since surfaced online.

Halford recently publicly revealed that he battled prostate cancer during the pandemic. He previously mentioned his cancer battle in the new chapter added to the updated paperback edition of his autobiography, “Confess”. In “Confess”, Halford revealed that he was diagnosed with cancer after experiencing symptoms for at least a couple of years.

In July 2020, Rob underwent prostatectomy, an operation where the entire prostate gland is removed plus some of the tissue around it, including the seminal vesicles. After more cancer was found last year, he went through radiation treatments in April and May 2021 and eventually got then all-clear in June 2021. He also had an appendectomy after a tumor was discovered on his appendix.

Faulkner suffered an acute cardiac aortic dissection during the band’s performance at the Louder Than Life festival in late September. Faulkner was rushed to the UofL Health – Jewish Hospital where the cardiothoracic surgery team needed approximately 10 hours to complete a life-saving surgery.

PRIEST guitarist Glenn Tipton was diagnosed with Parkinson’s disease eight years ago after being stricken by the condition at least half a decade earlier. Tipton announced in early 2018 he was going to sit out touring activities in support of “Firepower”. He was replaced by “Firepower” producer Andy Sneap, who is also known for his work in NWOBHM revivalists HELL and cult thrash outfit SABBAT.

April 14, 2022 SHINEDOWN has performing a cover of FOO FIGHTERS' "Wheels" during its current tour as a tribute to FF drummer Taylor Hawkins, who died last month while on tour in Colombia. Fan-filmed video of SHINEDOWN's Zach Myers, Eric Bass and Barry Kerch playing the track during their April 11 headlining concert at Denny Sanford Premier Center in Sioux Falls, South Dakota can be seen below. Myers handled lead vocals for the song, which was originally recorded for FOO […]