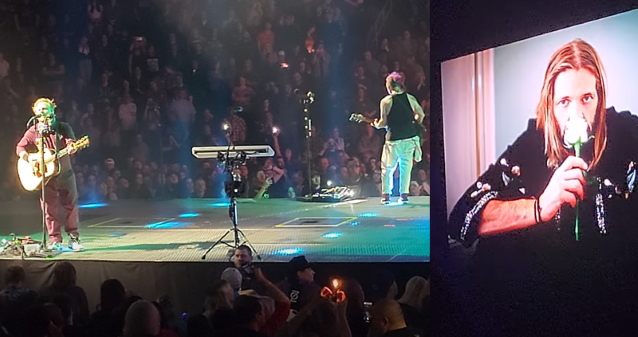 SHINEDOWN has performing a cover of FOO FIGHTERS‘ “Wheels” during its current tour as a tribute to FF drummer Taylor Hawkins, who died last month while on tour in Colombia. Fan-filmed video of SHINEDOWN‘s Zach Myers, Eric Bass and Barry Kerch playing the track during their April 11 headlining concert at Denny Sanford Premier Center in Sioux Falls, South Dakota can be seen below. Myers handled lead vocals for the song, which was originally recorded for FOO FIGHTERS‘ “Greatest Hits” album with producer Butch Vig.

Hawkins was found dead on March 25 at the Four Seasons Casa Medina hotel in Bogota.

An official cause of death for Hawkins hasn’t yet been released. But on March 26, Colombia’s attorney general’s office released a preliminary toxicology report, saying that medical examiners found evidence of 10 types of substances in Hawkins‘s body, including opioids, benzodiazepines, marijuana and antidepressants.

When Taylor‘s death was first announced, Myers took to social media to share a photo of the drummer and he wrote: “If you’ve ever wondered about the impact one human could make on an entire community, look at your timeline today …. It’s filled with this man … who was one of the nicest, coolest and most talented people on this earth …. You’ll be sorely missed … Our love and thoughts and prayers go to the Hawkins family and the FOO‘s.”

Hawkins joined FOO FIGHTERS in 1997. Prior to that, he played with the Orange County band SYLVIA and was also in the backing band for Sass Jordan. He also toured with Alanis Morissette as her drummer.

Hawkins was inducted into the Rock And Roll Hall Of Fame last year as a member of the FOO FIGHTERS.

Earlier this week, SHINEDOWN decided to move the release date of its new album, “Planet Zero”, to July 1 from the previously announced April 22 due to delays in physical production of vinyl and CDs. The high-concept, ultra-vivid, viscerally charged album, which sees SHINEDOWN taking on the forces that keep us divided at a time when we need to be coming together, was produced by Bass (who also helmed the band’s 2018 acclaimed album “Attention Attention”) and recorded at Bass‘s newly built Big Animal Studio in South Carolina.

It finally happened. After teasing their friendship online back in 2020 with a lever-action rifle and a viral Instagram post, Post Malone and Billy Strings performed together onstage. The “Circles” rapper joined the lightning-fast bluegrass picker at the Observatory in Santa Ana, California, for a rollicking cover of “Cocaine Blues,” the cautionary murder song made famous by Johnny Cash. “Billy Strings is the best to ever fucking do it,” Post Malone said upon walking onstage with a draft beer and […]